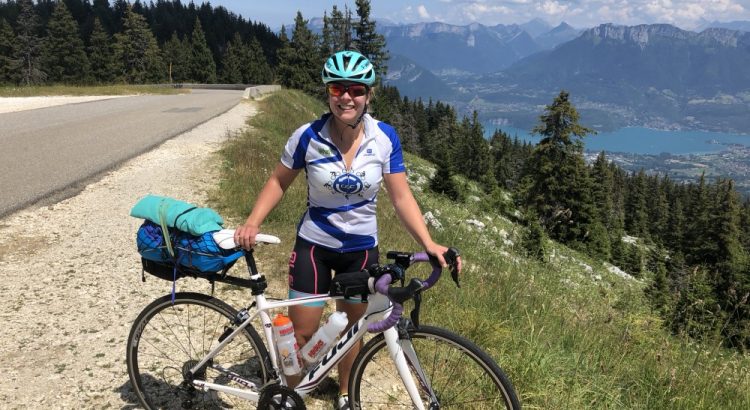 My first in 2012 was a bicycle adventure from Grenoble down to Die for a weekend, when we had two friends driving down in their (coincidentally matching) cars as support vehicles.  This meant we could pack what we needed (including formal wear for a planned kayaking trip) and pedal merrily along our way.

My second was my June 2018 Land’s End to John O’Groats trip which was brilliantly organised and supported by Carl at Great Bear Tours.  I packed up my big North Face bag with everything I could possibly need (including two bottles of squash, 20 or so ice packs and enough snacks to keep me going en route!) and left this in Carl’s van every morning.  Every night we got to our next hotel or B&B to find that Carl had carried our bags upstairs and all we had to do was shower put on clean clothes and reappear at a set time to meet the rest of the group and find somewhere to go for dinner.

Later that summer I had the opportunity to get back down to my beloved Grenoble with my bicycle again and join some friends for another cycle adventure.  This was my first (sort of) self supported trip.  I say sort of, because while I did have things I was carrying on my bike, Pat, Marie & Chris were certainly carrying a lot more!  Nevertheless I had what things I had strapped to a little clip on seat post rack on the back of my bike and got to experience for the first time the real joy of self supported cycle touring.  Touring where you don’t need a particular plan to arrive in a certain place at a certain time, you can go as far as you want and stay where you fancy, or spend some time traipsing around a busy Annecy on a French long weekend to find the only campsite that wasn’t full as unlike everyone else you hadn’t had to make a plan in advance.  From watching the Bastille Day fireworks and joining some small town celebrations, to seeing how France celebrates winning the world cup to beating mamils up Semnoz with a loaded bike, and best of all cycling with old friends again it was such a great trip!

I certainly wasn’t very prepared for the Bastille weekend trip, I’d worked out how to get my bike down to Grenoble via a work trip in Lyon, I’d borrowed a lightweight sleeping bag, and decanted my toiletries, then left them at my AirBnB in Lyon, but really I hadn’t got much further.  Luckily Marie had plenty to lend to cover me, in exchange for a jar of English mint sauce and we were soon on our way.

Finally last summer, I joined Jessie for some of her self-supported cycle adventure around Scotland.  For this I was much more prepared with the kit I needed.  Despite making quite a last minute decision to join working around various interviews I had scheduled I’d been doing my research, and with a combination of borrowing some key items and an exciting trip to GoOutdoors and Decathlon I had everything I needed to tour happily and comfortably.

Something I’d also like to try is ‘credit card touring’, a self-supported tour, but with less stuff with stops at pubs and B&Bs instead of camping. This would obviously be more expensive and you’d probably need to book in advance, but with some careful planning and organisation would probably be a great hybrid option. Watch this space!

So those are my experiences of cycle touring, but which type is best?

On the one hand, it’s great not to have to worry about carrying your stuff. With no weight you can probably go further and all of your energy can go into cycling rather than pitching tents and finding somewhere to stay. I think an organised tour is also great for when you have a big journey in mind, and the way Carl seemed to magically appear and help us anytime anyone had a puncture was amazing.

On the other hand a self supported cycle tour perhaps feels like more of an adventure. Not only are you cycling from place to place, but also deciding where to go, camping and jumping in streams and lakes. The freedom to go wherever you want, knowing you have everything you need with you on the bike is incredible. It’s not just about the quantity, but the quality of miles cycled.

Supported or unsupported exploring by bike certainly is a great way to travel. Fast enough to get somewhere, but slow enough to enjoy the views (and in my case take many many photos!) along the way. I’m not a big driver and much prefer the idea of adventuring a long distance on my bike than stressing on a motorway in my car.

In my next post I’ve put together a list of the kit I took on my self-supported cycling trip to Scotland in Summer 2019.  I thought this might be helpful to you if you’re thinking of going cycle touring, and for me too as I plan my next trip!