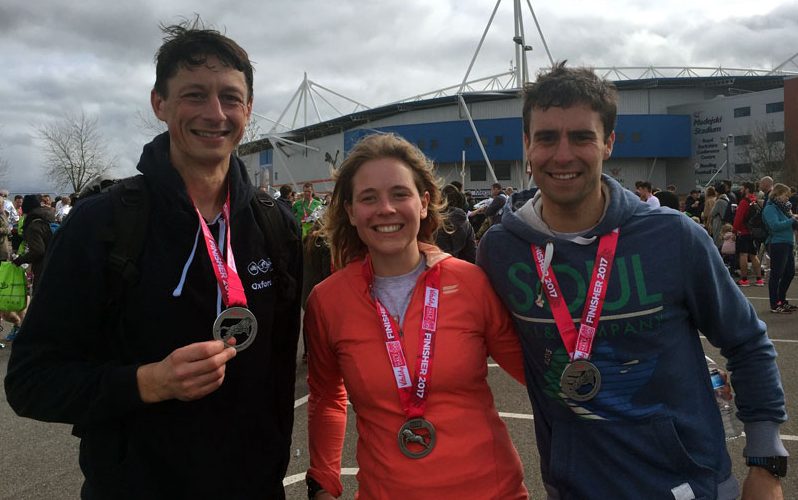 Another morning waking up before the alarm, I think this a combination of pre-race nerves and light mornings (I’d never realised quite how much light my curtains let in when I lived at home!)  We got up and dressed, easy on race morning with a set outfit, and hurried downstairs for a fail-safe cinnamon and raisin bagel.  Perhaps not a textbook pre-race breakfast, but it works for me and I’m not ready to try something new on race day.  We said goodbye to my family, jumped in the car and headed to our pre-booked pink parking by the Madjeski stadium.  We arrived in plenty of time and the convenient pink parking was in walking distance of the start of the race, leaving ample time for an extra trip to the portaloos before we walked to the stadium.

When we got to race village we met Neil, and OxfordTri friend who was also racing, by the next batch of portaloos and it was soon time to check in our bags and head down to the startline.  I did a bit of warming up running up and down before joining the Red Number pen.

I stood with Neil while we waited for the race to start, having a chat and a good nose at everyone’s running outfits and trainers… you’ve got to do something while you wait!  I even saw one girl with matching trainers and socks to me – she’d better join the Oxford Tri matching kit club!  Soonish we were off, well we hurried up to the start line and had to wait three minutes from the previous band of runners to get started.

The race started well and I ran along easily making my 7:31 min / mile target that I needed to beat my Wokingham PB.  I actually ran the first mile a bit too fast at 7:15, but congratulated myself on having 15 spare seconds in the bank for later.  This moment of joy didn’t last long as soon we hit the first long hill where I was overtaken by lots of runners, including club chairman Alex who I hadn’t even realised was racing!

After the hill came Reading Uni campus which this year had some extra wiggles which were not helped by the onset of the headwind.  By this stage I think my shorts were already starting to chafe – why didn’t I think of applying body glide?

We ran down into Reading town centre and were greeted by the Reading Family Church blasting out some great loud and cheery music, and the brass band under the underpass.  After running past Debenhams I spotted the TVT support team on the corner of broad street then made my way round the back of the office and towards Forbury park.  Sadly all the cheery supporters didn’t manage to make the run through town an enjoyable experience as the headwind hit again as we ran towards the Oxford Road.

By the time came to tackle the hill up from the Oxford Road at the other end of town I didn’t even manage a sub 8 minute mile and readjusted my target from trying to beat my 1:38 Wokingham result, to trying to finish in 1:40.  Things didn’t improve much for me as the race went on, running round Prospect Park and then into the headwind again, just where we all had dreaded it, on the endless drag along the IDR back to Madjeski stadium.  This part of the race was definitely improved by being surrounded by other supportive runners and I tried my best to draft behind them, trying to shelter from the wind and get in under my new target time.

I think I pushed a bit hard as the time ticked away and the miles didn’t on that final stretch, as at bang on 13 miles the stitch that’s been plaguing me returned, tying the space under my ribs up in knots just as the finish line came into sight.  I had to slow to a walk and some very kind runner slowed down with me, encouraging me on.  I really hope that didn’t make him miss his PB!

One final steepish slope down into the stadium before I dragged myself to and over the finish line, not really managing my customary and exhilarating sprint finish.  I think I must have looked as awful as I felt by that stage as a finish line lady suggested I went and sat down and then appeared with a bottle of water!  My final time was 1:40:42, missing both my original and adjusted target, but at least I didn’t have to run anymore!

Once I had recovered a little, I left the stadium and walked through the channel of post-race gifts, picking up a nice medal, a much-needed bottle of Lucozade and another oversized race t-shirt / PJ top that I am actually wearing while I write this post.  I really don’t know why Eynsham 10k seem to be the only ones outside Ironman who give away a women’s-specific race t-shirt?

On the other side I met Dan, remembered to ask him how his race was before launching into talking about mine (bonus points there!) and was very relieved to discover that he and all the Oxford City boys had also struggled in the wind.  He’d still run a great time: 1:19:09, but was about 2 mins off where he’d wanted to be, which like my time would have been a PB if we hadn’t both had such great races at Wokingham Half.

We met up with Neil again (who had smashed it with a new PB of 1:32:40!) had a quick photo, then walked achily back to the cars.

We had a very nice relaxing afternoon of eating, watching TV and resting our achey legs, before a fantastic trip to the cinema to see Emma Watson star in Beauty and the Beast.  Wonderful!