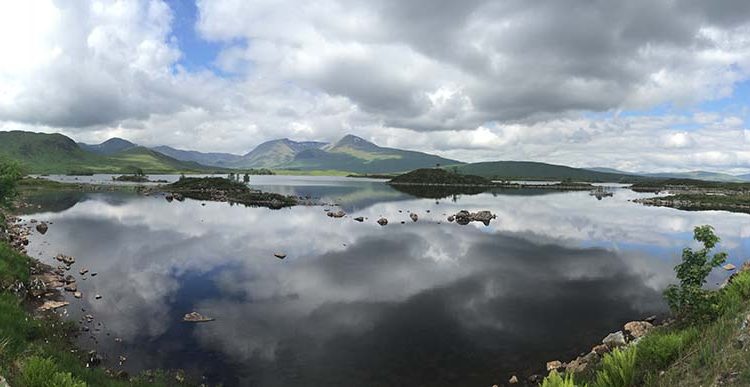 LEJOG day 10 : foxgloves, ferns oh and some of the most breathtaking mountain scenery I think I’ve ever seen! Today was our longest (and fastest!) day yet, cycling just over 85 miles with 3317ft of elevation with an average speed of 14.7 mph. This took us halfway across Scotland from Crianlarich, through Glencoe and the Great Glen to Fort Augustus on the tail end of Loch Ness.

We woke to a beautiful morning in Midgie Central, and after admiring the views through our bedroom window and over breakfast had to set off very quickly once we were outside to avoid being eaten alive! On the bikes it was fine, and it seems that just walking is fast enough for them to not keep up. Either way I might not rush back to go camping in Crianlarich any time soon!

I’d been told to expect incredible views today and I was not disappointed! We rode along the valley out of Stirling and into Argyll & Bute with huge grassy and inviting hills or mountains on either side.

As we kept going the scenery got better and better, with huge reflective lakes and mountains with patches of snow and their summits lost in the mist and clouds. Then we crossed over into the Highlands proper – a very impressive sign and rightly so! I had thought we were there already, so my apologies for yesterday’s misleading update! 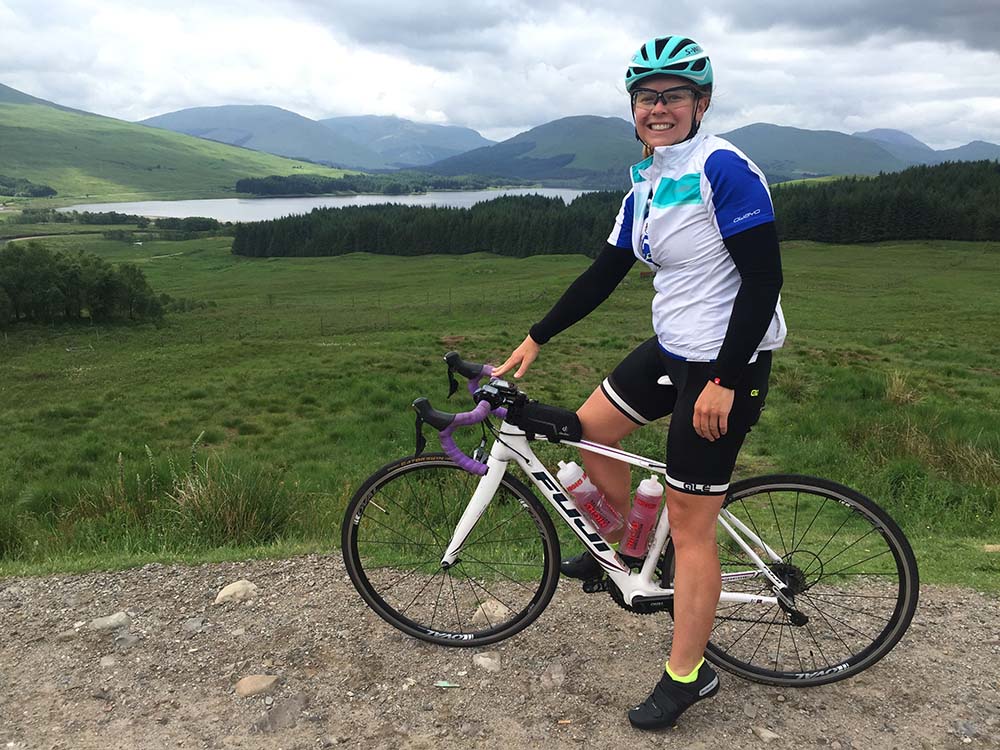 This is the point where I had to upgrade my iCloud storage as I had taken too many photos. Completely worth it as the scenery was so amazing!

After this we headed into Glencoe which was just magnificent. Everything today was on such a monumental scale that I felt we were tiny, even the occasional houses dotted along the valley looked tiny at the base of the mountains! I filmed a lot on my little action camera so am hoping that some of the beauty with come across when I look at the footage as it was really breathtaking! I was smiling from ear to ear with joy at my wonderful surroundings as I cycled along, the wind whistling in my ears! Another notable and special sound from today wasn’t Rachel’s mini rendition of ‘the hills are alive’ but the sound of all the little streams and waterfalls we passed en route! I was rather disappointed when a gang of motorcyclists drowned out the sound of one waterfall later in the day!

Climbing up the Glencoe Ski Resort Café for a cake turned out to be very worthwhile. Then we headed down the valley, to meet Loch Linnhe which we crossed and followed into Fort William where we enjoyed a picnic lunch in the Fort Ruins with Ben Nevis in the background. After all our good luck, the weather has really started to turn today and with cloudy skies and cold winds I was layered up for most of the day, with coats coming on and off at the top and bottom of hills.

After a long morning gawping and taking photos we didn’t finish lunch until around 4pm and got a bit panicked about the time with another 32 miles to go so ended up racing into Fort Augustus arriving in less than two hours, admiring the views en route in passing. My then my foot was starting to hurt so I have been icing it tonight ready for our final two days on the road. I feel that mentally I’d love to go on and on and keep cycling back round and down the other side, but my legs are exhausted and my bottom and saddle aren’t getting on as they used to!

The final challenge / excitement of the day was a little dip in Loch Ness! It just had to be done! It was super shallow where I went in with slimey pebbles underfoot, but otherwise very nice! I didn’t see Nessie but she was probably out in the deeper waters! Cycling back to the B&B slightly soggy and with my watch on I felt like I was racing again, but this time I was good and stayed away from finishing with a run!

Just two more days to go now. 781 miles done, and around 150-160 to go. Through this journey and your generosity I’ve managed to so far raise £1849 for Alzheimer’s Research. It makes me so happy that I can do something positive in the face of this currently incurable, untreatable, unslowable disease, so thank you so very very much for supporting me in that.

Here’s the day’s ride on Strava: