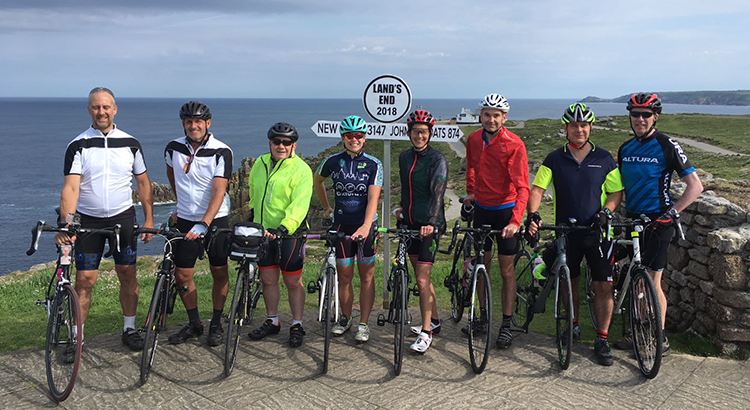 Though not a cycling day, day 0 was a big day on the trip.  Even after Sarah and Tracy’s suggestions to drastically reduce my packing, my bag still didn’t seem to be as big as remembered by the time I had stuffed it full of ice packs, and enough food for a month-long exhibition (there weren’t going to be shops in Scotland right?!).  Sarah very kindly picked me and my bike up and we waited nervously at the Oxford services for Carl and the rest of the group to arrive.  Soon my bike was securely attached to the roof of the van and we headed off on our long journey down to the most southerly part of the country.

The journey down and meal out on the first night were a great opportunity to start to get to know everyone, including Rachel, the only other girl on the trip, with whom I’d be sharing a room and many adventures with by the time we got to John O’Groats.

And now back to Day 1 – Land’s End to Liskeard

Day 1 started with a puncture for me, before we’d even got started!  I’d felt pretty chuffed about the bike maintenance / cleaning that I had done in advance of the trip, but seemed to have managed to trap the edge of my inner tube into the rim when I was putting it in.  A few tyre levers later and a bit of frustration later (thank you super tough gatorskin tyres… and Carl for actually doing the tube change!) and it was ready.

It was very windy when we got to Land’s End and we started the trip as we meant to go on, with a group photo by the temporary Land’s End sign.  It turns out that Land’s End has both an official and an unofficial sign, and to take a photo with the official sign you need to pay a fee!  Luckily we were there before the official sign man turned up, though he wasn’t impressed when I took a last photo of the gorgeous Cornish coastline after he’d put his sign back up!  Not sure I am too keen on someone charging to take a photo of a national landmark!

Soon we were off and cycling along the Cornish coastline, which strongly reminded me of Brittany.  Quite soon we ended up splitting into two groups, a five and a three as we went along at different paces.  For many of my fellow LEJOGers it was their first time riding in a group, while for me that was all I was really used to!  As we went through the days we got the hang of signalling to each other before any sudden changes, and working well as a team, but for that first day we were all happy to have started and to be zipping along enjoying the views!

Once we left the coast line we started climbing hills.  I was glad to have been pre-warned that Cornwall and Devon were some of the hilliest days, that coupled with the hard-learned lesson that being near the coast doesn’t mean it’s pancake flat!

And then, there it was day 1 of my LEJOG adventure for Alzheimers Research complete! 75.5 miles, 5965 ft of climbing, sunshine, beautiful green countryside, strong headwinds, lots of hills and a new group of friends! On to the next 79 miles up to Wellington in Somerset!